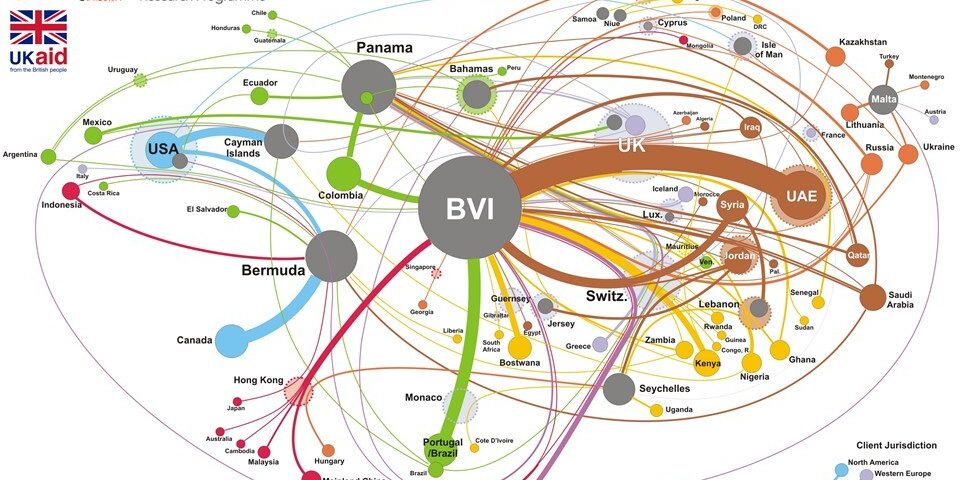 In our previous blog entry, we discussed the new database of historical financial secrecy regulatory variables that we have created over the past year.

We are currently in the process of conducting regression analyses to determine how the changing international regulatory landscape revealed by this dataset has impacted shell company use since the turn of the millennium.  The most detailed window into this landscape of shell company use that we have found is provided by the ICIJ leaked datasets—i.e. the Panama Papers, Paradise Papers, and Offshore Leaks. 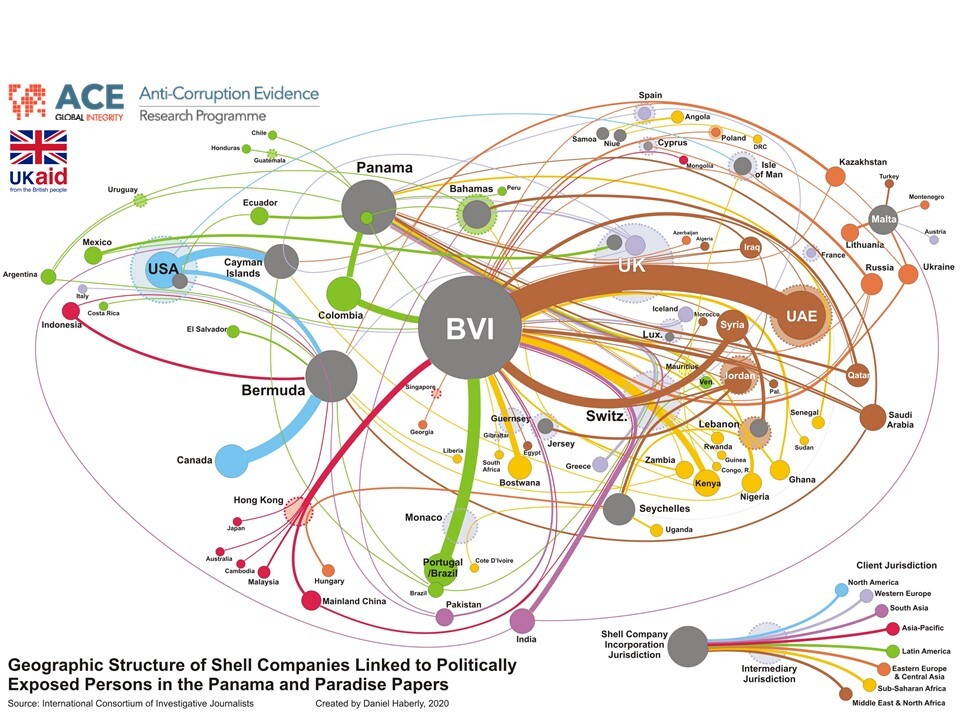 To convey some of the key structures and relationships in this dataset we have created the network map above that shows the incorporation and administration of all Politically Exposed Person (PEP)-linked shell companies flagged by ICIJ—or just under 300 offshore companies in total, linked to 140 PEPs in over 50 countries.

As shown in the map, most of these shell companies are not located in any one jurisdiction, but rather have different aspects of their legal registration and functional administration spread between multiple locations.  Typically, aside from the client jurisdiction(s), there are two key places involved in the operation of any given shell entity.  The first is the jurisdiction where it is legally formed.  The second is the jurisdiction where its address is located.  However, for most of the entities shown here, this is in fact not the same jurisdiction as that of legal entity formation.  Rather, it is typically in some more substantive financial center home to one or more financial, legal, and/or accountancy firms that play front and/or back-office intermediary roles in relation to the company.  In other words, pinning down even the nominal location of an offshore “letterbox” company is actually more complicated than you would imagine, and in our analysis, we are trying to disentangle the impacts of regulatory change at multiple distinct layers of shell company architecture.

Given its source in data leaks, our map of PEP shell company use is not necessarily representative or unbiased, and moreover compresses historically changing patterns into a single snapshot.  Also, in the absence of data on the sizes of these companies, the view here is based on company counts.  However, it still shines an invaluable spotlight into this opaque realm, making visible some key elements.

First, at the level of offshore company incorporation, the dominant role of the British Virgin Islands (BVI) is most striking, with BVI companies appearing to be the vehicle of choice for PEP clients from most regions outside of North America.  Nearly half of all entities shown in the figure are legally established in BVI.  This appears, moreover, to be broadly representative of BVI’s overall importance in the shell company market; while the value of funds booked in BVI shell companies is not known, BVI appears (based on available data) likely to  host a larger number of shell companies than any other jurisdiction apart from Delaware.

Second, while BVI is the most important center of shell company formation, the geography of the intermediation activities serving these companies (based on company addresses) can be described as bipolar, with Switzerland and the UK—or more specifically, Geneva and London—playing dominant roles.  Switzerland/Geneva, in particular, stands out as the key international crossroads of PEP shell company intermediation in the map, serving as relations and administration centers for companies incorporated elsewhere on behalf of clients from most regions of the world apart from North America.  Meanwhile, the UK/London appears to exhibit, in this data at least, a stronger regional focus on Middle Eastern and Eastern European / post-socialist PEP shell company administration (though keep in mind that this emphasis may not be more broadly representative).

Notably, while the UK itself plays a slightly less important direct role than Switzerland as a PEP  services hub, the picture changes when the UK’s far-flung international network of offshore territories and dependencies is taken into account.  In all, just under 40% of the PEP shell companies in the map are served by an intermediary in either the UK itself or a UK territory or dependency—compared to 17% served by Swiss intermediaries.  In this respect, some of the major British “small island” offshore dependencies, in particular, the Channel Islands and the Isle of Man, are more prominently represented here as intermediary centers than as incorporation centers.  Overall, however, at the level of incorporation, the PEP shell company “market share” of the UK and its territories and dependencies—including BVI—is 70% for this sample of companies.

Importantly, not all of the companies shown are linked to corrupt or other illicit activities.  However, a very high proportion of these companies are either directly or indirectly linked to such activities.  Indeed, companies shown here are either demonstrably or allegedly linked to a number of high-profile corruption scandals, as well as family members and associates of kleptocratic regimes more broadly.  Most visible is the footprint of companies potentially linked to the Brazilian “Car Wash” scandal, which accounts for the large flow of money from Brazil and Portugal into BVI companies via Monaco.  Also shown are companies linked to the Ablyazov case in Kazakhstan, the disgraced former party secretary of Chongqing, and members of the Mubarak, Assad, Aliyev, and Suharto families in Egypt, Syria, Azerbaijan, and Indonesia, as well as close associates of the Putin administration in Russia.

We are currently quantitatively assessing—using the complete ICIJ dataset of all shell companies—the extent to which the changing international regulatory framework captured in our map has had a substantive impact on “high risk” shell company formation.  In this respect, the UK and its offshore territories and dependencies present a particularly interesting paradox—and set of related questions.  Notably, the UK’s offshore territories and dependencies have actually been relatively proactive in adopting enhanced regulation and transparency on paper in most relevant areas (e.g. related to client due diligence, beneficial ownership recording, etc.), with the UK itself also quickly implementing the EU’s 2015 beneficial ownership reporting requirements even while other major European countries have dragged their feet.  However, the UK and its territories and dependencies continue to dominate the world map of offshore structures and services, and it is unclear to what extent these reforms have been implemented in a way that actually deters various types of activities, as opposed to primarily enhancing jurisdictional reputational “branding” within an increasingly segmented offshore services market.

We will continue to provide updates as our analysis progresses, and in the meantime welcome any comments or suggestions!