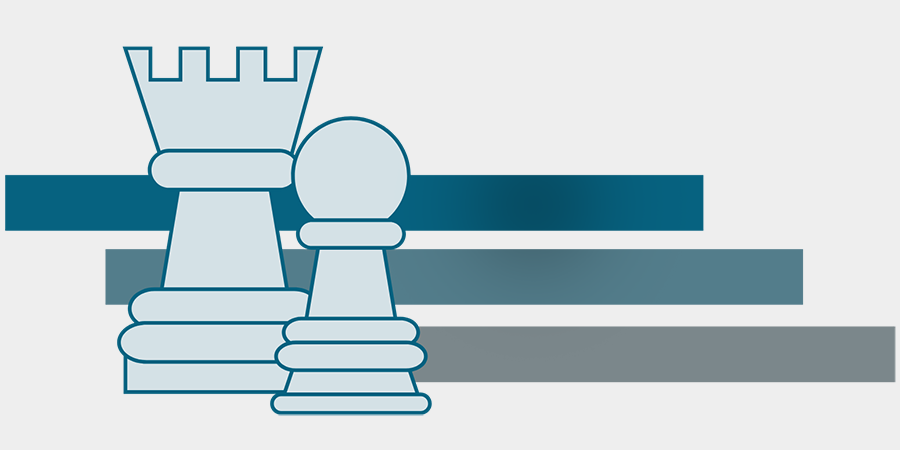 It’s a truism to say that to tackle corruption, we need a strategy. And indeed there is no shortage of anti-corruption strategies on offer – from national government level, through international agencies, non-governmental organisations to civil society groups. Yet, in practice, these strategies have tended to deliver disappointing results: it is well recognised that anti-corruption efforts over recent decades have rarely had the desired impact. To explore why, Mark Pyman and I recently took a closer look at the notion of ‘strategy’. We went back to the origins of the term, analysing how good strategy is defined, taught and formulated in the domains of the military, business and politics. Of particular note was the observation by Laurence Freedman, author of the magisterial and award-winning magnum opus, Strategy – A History, that we need to distinguish a strategy from a plan. Whereas strategy is needed ‘where there is actual or potential conflict, when interests collide, and forms of resolution are required’, a plan by contrast presupposes a predictable sequence of events. Freedman’s simple, yet crucial, observation is that ‘Strategy is required when others might frustrate one’s plans because they have different and possibly opposing interests and concerns.’

In practice, however, many anti-corruption ‘strategies’ contain no reference to conflict, or opposing interests, tending instead to be documents that set out a series of clear steps and measures that will lead ineluctably to the desired end, often on the basis of ‘political will’ being the crucial ingredient. Yet, as we know, many an anti-corruption intervention has foundered precisely in the face of ‘political won’t’. So, what do we need to do in order to deliver a good strategy that can work to address that ‘political won’t’? One insight we took from our analysis, based on the work of Richard Rumelt, is that an effective strategy requires three core elements: a diagnosis that ‘simplifies the often overwhelming ill-structured complexity of reality by identifying certain aspects of the situation as critical’, a ‘guiding policy’ that specifies the approach to dealing with the main obstacles identified in the diagnosis, and a set of coherent actions that follow from that analysis. It is important to note that the guiding policy does not seek to identify exactly what should be done in any given situation, but rather is used to rule out a whole array of potential actions that will not be helpful. Thus, for instance, it makes little sense to call for agents to hold principals to account in situations where the governing equilibrium is particularistic, since in those situations there is no meaningful agency to be exercised; similarly, a declaration that the judicial system needs strengthening may reflect a genuinely held desire, but cannot be delivered in systems where the judiciary has been captured by ruling interests.

So, what does GI-ACE contribute to this discussion of strategy? One of the most important aspects of the projects currently underway is that their starting point is foursquarely focused on diagnosis. The ACE programme is driven by framing principles that are a) specifically problem-focused (rather than just being against ‘corruption’); b) tied to real world priorities in sectors where corruption is usually part, but rarely all, of the problem; c) take politics seriously and focus on feasible and viable reforms; d) engage policy makers and practitioners from ‘nose to tail’ of the research process. In this way, we seek to get away from the kind of generic or overarching types of anti-corruption frameworks and reform proposals that set out ‘x’ steps to solving corruption and instead we offer a much more strategic, if inevitably messy and complex, way of understanding how best to develop anti-corruption interventions that can have real impact on the ground.

“People were put in a precarious position by government actions, and by the fact that the government didn’t see or think about them.”
– Jacqueline Klopp

Jacqueline Klopp and Amrita Dhillon spoke with Pod of the Planet, a podcast by Columbia University’s Earth Institute, on the impact that pandemic-related social and economic shocks have had on small-scale traders in Kenya and migrant laborers in India. With a first-hand account from women traders on the Kenyan and Ugandan border, the episode explores how both researchers have had to pivot their project to accommodate growing inequality and the impact of coronavirus on vulnerable groups. 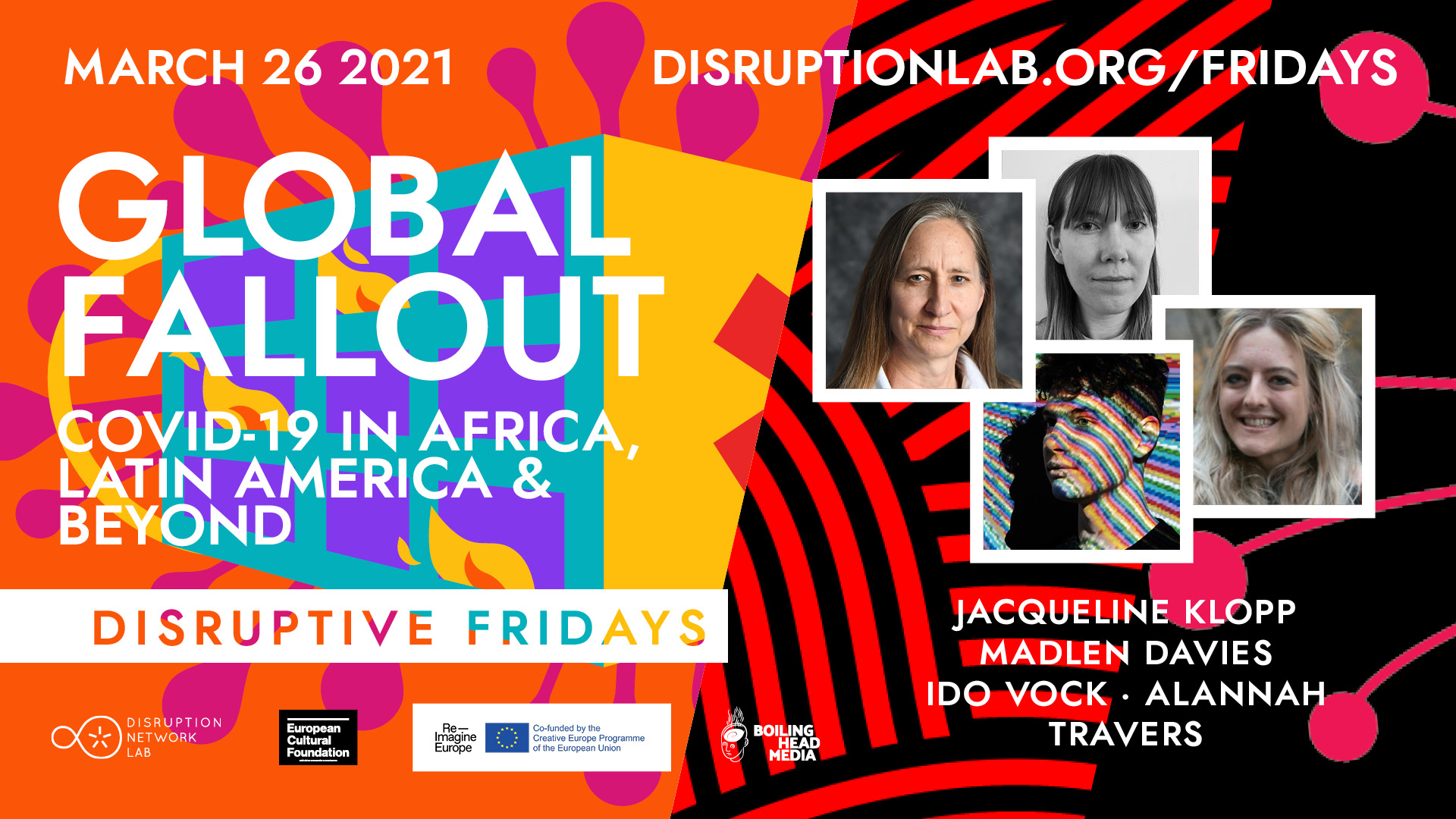 Join our upcoming event, Does Structure Rob Agency: Gender Mainstreaming in Anti-Corruption Research Design? with panelists Pallavi Roy, Claudia Baez Camargo, Jacqueline Klopp, and Sohela Nazneen. They will address why gender is an important lens to take when engaging in corruption research on March 23rd at 10:00 EST.

Financial Patterns and International Architectures: Grand corruption, Nigeria and the Role of the West, will be held on March 24th at 11:00 EST. Join Dan Haberly, Jackie Harvey, Tena Prelec, Abdullahi Shehu, Peter Sproat, and Ricardo Soares de Oliveira at this virtual event co-hosted by the Department of Politics and International Relations (DPIR) at the University of Oxford and GI-ACE.

Global Integrity is a Knowledge Partner for the virtual 2021 OECD Global Anti-Corruption & Integrity Forum. Jacqueline Klopp will facilitate a conversation on COVID & Corruption: Impacts and Lessons for Small Scale Cross-Border Traders alongside Lornah Wahome with the Busara Center for Behavioral Economics, David Orega with Sauti Africa, and Eleanor Wiseman with the University of California Berkeley on March 25th at 9:00 EST. Claudia Baez Camargo will also be presenting at the OECD on integrity, social norms and informal practices in emergency response situations and Liz David-Barrett will be presenting at the OECD on the governance of corruption.

If you missed Jacqueline Klopp on Thursday, you can catch her at Global Fallout: Covid-19 in Africa, Latin America & Beyond, Disruptive Fridays discussion with the New Statesman’s International Correspondent Ido Vock and UK-based investigative journalist Franz Wild. The event is part of a weekly series hosted by Disruption Network Lab on Friday, March 26th, 12 EST. 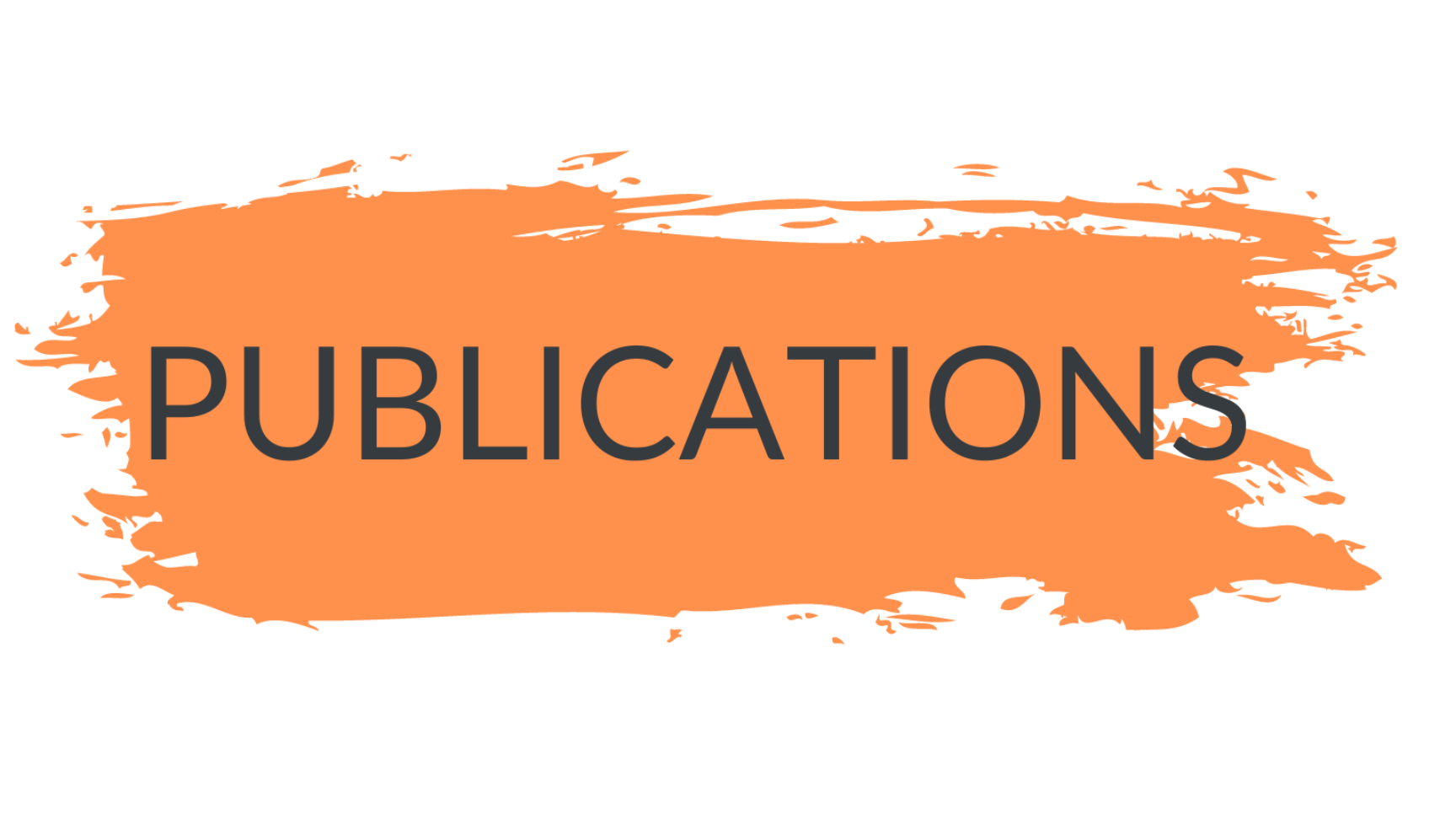 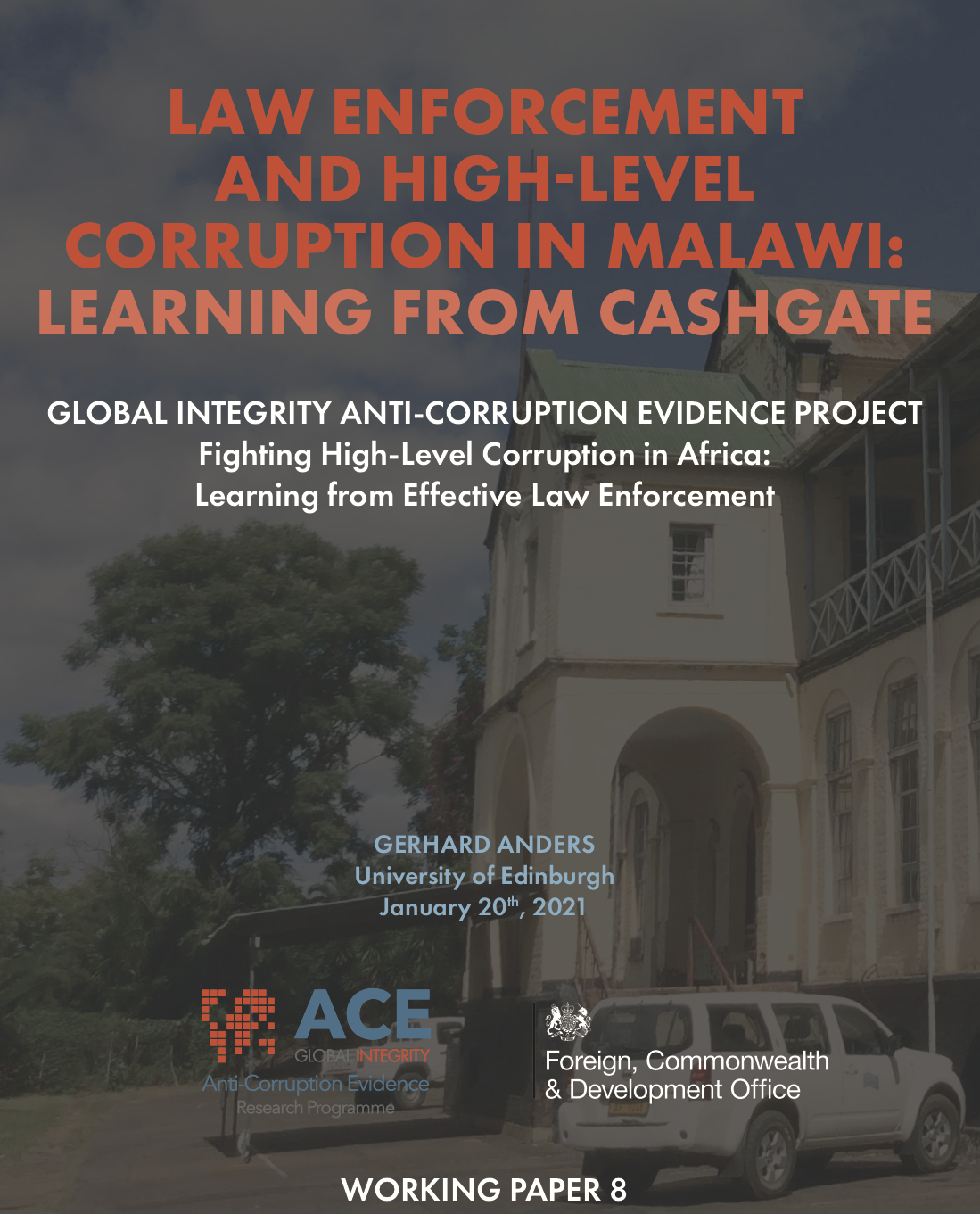 Cashgate in Malawi and Reassessing Law Enforcement in Nigeria

Learning from Cashgate, by Gerhard Anders grapples with the duality between the perceived challenges facing anti-corruption law enforcement in Africa, namely a lack of resources and the scale of the problem, and significant efforts by law enforcement to target the 2013 corruption scandal in Malawi known as “Cashgate”. Check out the accompanying policy brief for key recommendations and insights.

A Case of Smoke and Mirrors

A Case Study of the International Money Laundering Framework as Applied in Nigeria, a Case of Smoke and Mirrors by Jackie Harvey addresses the existing Anti-Money Laundering Framework promulgated by the Financial Action Task Force (FATF) and recommendations to improve transparency and identify beneficial ownership. These recommendations require national governments to maintain and share precise data on the legal and financial infrastructures in place tracking illicit movement of corrupt funds. The project argues that this complex framework in fact serves as an elaborate game of “smoke and mirrors” that results in the appearance of compliance but really serves to conceal the opaque nature of the Nigerian legal and regulatory environment.

The Case for Accessible Audit Data

The Case for Accessible Audit Data: Tracking the Effectiveness of Indian Governance Schemes by Amrita Dhillon argues that accessible social audit data is essential to evaluate the effectiveness of large-scale public service delivery projects in India, especially given previous performance audits have documented significant fiscal discrepancies that result in losses in the state exchequer.

Amrita Dhillon on her project that looks at the efficacy of audits in assessing Indian governance schemes.

Anders, G., F.E. Kanyongolo, B. Seim. 2020. ‘Corruption and law enforcement: insights from a mixed-methods study in Malawi’, Journal of Modern African Studies 58, 3: 315-36. Drawing on a mixed-methods study from Malawi in southern Africa, where a large-scale law enforcement operation has been investigating and prosecuting those involved in a 2013 corruption scandal known as ‘Cashgate’, this article explores the potential for corruption deterrence from the perspective of government officials in the Malawi civil service.

Harris, A., and Meyer-Sahling, J., on Can public servants help prevent the resource curse in African countries? on the results of a survey of public servants, their feelings towards integrity and its relationship to public management. This is the largest transnational survey of its kind, conducted across Africa, Asia, Latin America, and Eastern Europe.

The Treasury Select Committee published evidence submitted by John Heathershaw and his team on the failure of UK financial institutions and real estate entities to effectively implement anti-money laundering regulation to curb the risks posed by politically exposed persons (PEPs).