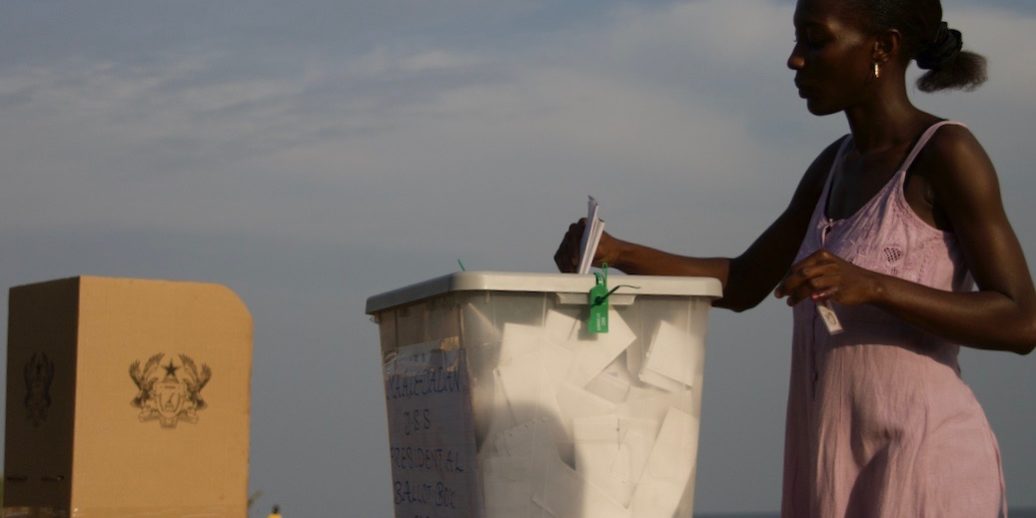 It has been more than 20 years since Allen Schick (1998) warned in the World Bank Research Observer that New Public Management reforms are not suitable for the re-organisation of the public sector in developing countries. Decentralisation, performance related pay and the introduction of managerial discretion to ‘let managers manage’ were popular in Organisation for Economic Co-operation and Development (OECD) countries at the time. International aid organisations and consultants promoted these managerial reforms in developing countries assuming that what worked for OECD countries must also work for developing ones.

Notwithstanding the contested nature of managerial reforms in OECD countries themselves, their uptake by developing country governments has been widely criticised. Schick (1998) himself argued against their blanket introduction. Instead, he favoured the sequencing of reforms whereby developing countries should first introduce classic Weberian-style bureaucracies to nurture a ‘public service ethos’ characterised by professionalism and impartiality, and to foster the rule of law before the delegation of discretion to public sector managers could become a viable reform alternative. Without the presence of a public service ethos and a strong regulatory environment to sanction corrupt behaviour, managerial reforms would increase the risk of abuse of office for private gain in the civil service.

Schick’s (1998) initial concerns have been confirmed by evaluations of international aid organisations (e.g. World Bank 2008) and qualitative studies of public management reforms in the developing world (Manning 2001, Yanguas/Bukenya 2016). They suggest that managerial reforms have indeed often failed, as formal institutions have been adopted but not implemented in practice. Andrews (2013) prominently argues that public sector reforms in developing countries have tended towards mimicry, whereby they emulate OECD reforms in form but not in function. However, so far there have been no quantitative studies that compare these management practices in OECD and developing countries to assess the validity of these claims.

Our research on ‘(Un)principled Principals and (Un)principled Agents: The Differential Effect of Managerial Civil Service Reforms on Corruption in OECD and Developing Countries’ (https://onlinelibrary.wiley.com/doi/abs/10.1111/gove.12461) addresses this lacuna. Forming part of a larger multi-country research project on civil service reform and anti-corruption funded by ACE, we conducted a survey experiment with 6,500 civil servants in one OECD country (Chile) and three developing countries (Uganda, Ghana and Kosovo) to examine how civil service management practices affect corruption of civil servants. The survey included employees of central and local level administrations. It was conducted using face-to-face interviews in Ghana and Uganda, whereas in Kosovo it was possible to rely on an online survey.

The survey focuses on three areas of civil service management that have been subject to managerial reform in OECD countries since the 1980s and 1990s and have since become popular ingredients of public sector reform programmes in developing countries around the world:

In our survey, we assessed the effect of these three types of managerial civil service reforms by conducting conjoint experiments. Conjoint experiments are common in market research to understand which attributes of products are preferred by consumers. In our application of the conjoint experiment, our respondents are shown two hypothetical profiles of civil servants before choosing which profile they consider more likely to engage in the abuse of public office for personal benefit. The profiles are designed to resemble respondents’ colleagues at work. They address their rank, education, year of entry into the civil service, as well as the attributes of interest in our research, namely how they were recruited, how they are employed and how they are paid. The figure below provides an example of hypothetical profiles respondents were shown during the survey in Uganda. 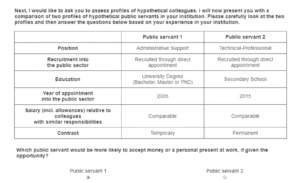 In developing countries, managerial reforms are associated with more corrupt civil servants, while the features of the traditional Weberian model of bureaucracy are associated with less corruption. By contrast, in our surveyed OECD country (Chile) managerial reforms make no significant difference for the perceived propensity of civil servants to engage in corruption.

Finally, the survey data shows that managerial discretion over pay detached from performance can lead to greater corruption of those on inferior salaries in developing countries.

Our research thus supports the view that civil service reform in developing countries should emphasise the features and principles of the traditional Weberian model of bureaucracy before turning to managerial reform. Even more so, our research underscores the importance of generating systematic statistical evidence on the effects of civil service management practices in different countries before embarking on a path of reform.

References used in the text including URLs